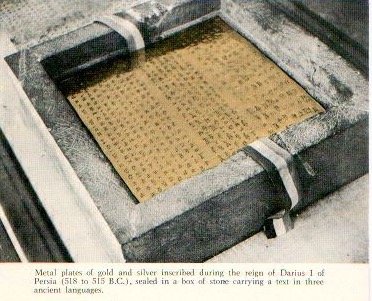 In the thousands of years of recorded history in the world, ancient peoples have used various means of preserving their writings.

Some have engraved their messages upon rock, such as the Rosetta Stone.  Others marked up clay tablets which then were sun-baked.  Writings have been found upon wood, cloth, leather, and bark.  Patterns have been woven into fabrics in some instances.  Probably one of the best known methods of preserving records anciently has been through the use of papyrus.

For many years it was not known that ancient records were kept upon plates of metal.  However, in recent times archaeologists have discovered scores of instances where such metallic records were kept.

Same were engraved beautifully upon gold and silver.  Others were made upon copper, bronze and lead.

The metal used for these records was beaten into thin plates of various sizes.  Some times alloys were used which made the metal very hard and durable.

The most recent such discovery was in the Dead Sea Scrolls, part of which consisted of two copper scrolls rolled up together.  The text was inscribed so deeply upon them that it stood out in relief on the back.

One of the most important and interesting of all the discoveries of ancient metal records was that of the plates of Emperor Darius I of Persia (518 B.C.)which were found sealed in a box of stone and bearing a text in three languages.  The plates were of gold and silver.

Sargon, King of Assyria (722 B.C.) repeats over and over in his"Annals" that he kept his records on plates of gold, silver, bronze, and lead.

Such plates have been found in many parts of the world, including America and the Orient.  Detailed information on them may be found in such books as Book of Mormon Message and Evidences, by Dr. Franklin S. Harris, Jr.; The Instructor for October, 1957, (published in Salt Lake City) and Dr. Hugh Nibley's book, An Approach to the Book of Mormon.

The accompanying pictures in this folder show some of the not able discoveries of records engraved on metal plates.  These are on exhibit in various important museums of the world.

In a day when such records were unknown, and vehemently denied by the best scholars, Joseph Smith was shown the reposing place of a box of stones, cemented together, containing gold plates.  On these were engraved the abridged account of ancient peoples of the American Continent.  Because this was revealed to him by Moroni, the resurrected ancient author and custodian, his story was disbelieved, and his reputation maligned.

Today, archaeological discovery shows that both gold plates and stone boxes to contain them were used by ancient recorders of approximately the same period of time, from the same part of the world, as were the people described in the gold plates deciphered by Joseph Smith.